Activity pages (word searches, coloring pages and more!) have been developed for most of my picture books. Send me an email at maureenfergus@mymts.net and I'll email them to you! 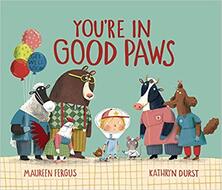 ​Slightly distracted parents accidentally take their son, Leo, to the animal hospital to get his tonsils out. Luckily, taking care of a human doesn't ruffle any feathers among the hospital staff. The chicken at the admissions desk is welcoming, the bear orderly is friendly and wise Dr. Stan inspires tremendous confidence despite being a mouse. Is the plastic cone really necessary, though? In this sweet and hilarious story, a child discovers that a trip to the hospital can be a positive experience--even when the hospital isn't quite up to code . . . 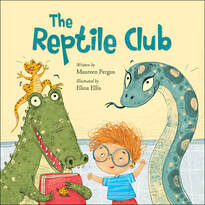 The Reptile Club
​(Kids Can Press, 2019)
​There are lots of clubs for Rory to join at his new school, but none seem quite right for him. So when his parents suggest that he start his own club about something he loves, Rory knows exactly what it will be: a Reptile Club! He's positive that there are other kids out there who share his passion. He sets up his first meeting and then waits and waits for other students to show up. Just as he is about to give up, Rory hears whispering in the hallway and hurries over to see who it is. To his astonishment, it's not his schoolmates who have arrived to attend the first meeting, but a crocodile, an anaconda and a gecko!

When Wonder Buddy and Super Earl learn that the Evil Doctor Stinker is planning to shut down the only hamburger factory in town, they know they have to find the supervillain’s secret lair ― fast! Hopping into the Earl-mobile, they race into the yard next door where they come face-to-face with the new neighbors. At first, Mister the bulldog is alarmed by Wonder Buddy’s laser-beam eyes  and Snowball the cat thinks that Earl is the funniest-looking mouse she’s ever seen. But when Snowball ends up in mortal danger, Buddy and Mister team up to save the day, and Snowball and Earl discover that they have more in common than they thought.

A soccer dad misunderstands when he hears that his son's team needs
his help. Instead of taking care of halftime snacks, Dad grabs a jersey and runs onto the field to play! And what an embarrassment he is: he hogs the ball, complains about his teammates and throws a hairy fit when the referee doesn't call a play his way! Can the boy find a way to teach his dad how to be a good sport before he drives the whole team crazy? 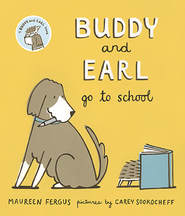 ​Buddy and Earl know that with the right education, they can become anything - even a dentist or a hot-dog vendor! So they eagerly gather their silly, smelly supplies and head to school. Soon after they arrive, their teacher, Miss Meredith, is called away and Professor Earl takes charge of the classroom. Buddy works hard at lessons like Sniffing Things, Tail Chasing and Scratching Itches. And when Professor Earl announces that one very special student is going to win a major award? Buddy cannot imagine who that lucky student might be...​ 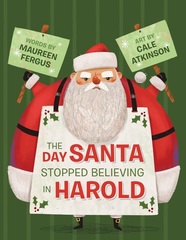 ​The Day Santa Stopped Believing in Harold (Tundra, 2016)
Santa has a problem. This kid? Harold? Santa doesn't think he's real. He WANTS to believe in Harold - after all, Harold is one of the most magical parts of Christmas. Getting Harold's letters, eating the cookies he leaves out, feeding his carrots to the reindeer...what would Christmas be without that? But Santa's just not sure. Some of his friends are telling him that they think Harold's not real. And the Harold that sat on his knee last Christmas looked AWFULLY different. Santa comes up with a plan to find out once and for all if Harold really exists ... with hilarious consequences

​​Buddy and Earl And The Great Big Baby (Groundwood, 2016)
​Mom's friend Mrs. Cunningham is coming for a visit, and she's bringing her baby! While Buddy tries to explain the ins and outs of babydom to Earl, neither of them is prepared for the chaos the small and adorable creature brings with it. When the baby manages to escape from its cage - which Buddy gently suggests is really just a playpen - its up to our favorite odd couple to save the day. This third title in the critically acclaimed Buddy and Earl  ​series follows a dog who likes to play by the rules and a hedgehog who knows no limits on  another fun adventure in deductive reasoning and imaginative play.

Buddy and Earl are safely tucked in for the night. Just as Buddy settles in for a nice, long sleep, Earl says it’s time to say “Bon voyage.” Soon these mismatched pals are at it again, exploring the wilds of the kitchen and defending a lovely lady hedgehog ― who may or may not be Mom’s hairbrush ― from imminent danger. When they’ve finally vanquished the greatest monster of all (the vacuum cleaner) it’s time for some well-earned shut-eye. This second book in the Buddy and Earl series reunites this odd and loveable animal couple.

Buddy does not know what is in the box that Meredith carries into the living room. But when the s﻿﻿﻿﻿mall, prickly creature says he is a pirate ― and that Buddy is a pirate too ― the two mismatched friends are off on a grand adventure. In this first book in the ​Buddy and Earl series, a dog who likes to play by the rules meets a hedgehog who knows no limits. Their friendship is tender and loyal, and their adventures are fun and imaginative.

Spencer and his dog Barney are expecting a visit from Great-Aunt Alice and her dog, Susan. All Spencer and Barney know is that she’s dignified and graceful, with long, beautiful hair — the dog, that is. Determined to teach Susan how to be a real dog, Spencer and Barney take her to the off-leash dog park to learn important skills like barking at buses, cyclists and squirrels, eating garbage, resisting grooming and refusing to come when she’s called. Susan returns from the park covered in burrs, having shed her dignity and grace in favor of embracing her inner dog. 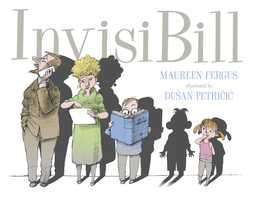 Bill just wanted someone to pass him the potatoes. Unfortunately, no one in his family noticed. If someone HAD noticed, the wonderful, terrible thing that happened might never have happened.  But it did. InvisiBill is the hilariously absurd, tongue-in-cheek story of an ordinary middle child who feels so overlooked by his busy, distracted family that he becomes invisibill...or InvisiBill!​ 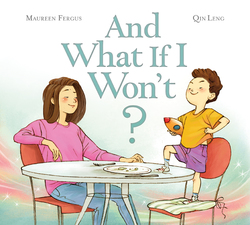 When Benny’s mother asks him to put his dirty plate in the sink, he responds by asking: “What would you do if ﻿﻿I said no?” Benny's “what if?” line of questioning continues as he dreams up increasingly naughty behavior. The story’s circular ending brings it all back home with a clever — and entirely reasonable — punchline.

​The Day My Mom Came to Kindergarten (Kids Can Press, 2013)
​When Mom comes to Kindergarten for the day, she's so excited that she completely forgets her manners. She BARGES into line. She TALKS all through story time. She SHOUTS out answers. It's hard to believe that she's ever been to school. She doesn't even know the basics! Lively and laugh-out-loud funny, this story is a fresh take on the classic story of role reversal, as a patient, understanding daughter guides her mom through the hard work and play of a day at school.