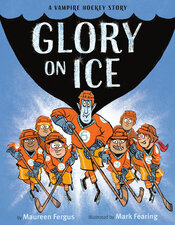 A vampire decides to bring his crushing-and-destroying skills to the ice in this hilarious story about the newest (and oldest) member of the local peewee hockey team.

After centuries alone in his old castle, Vlad is ready to try something new. When he hears the local hockey team gushing about how they're going to crush and destroy their opponents this season, Vlad knows he’s found the activity for him! Vlad soon realizes that his awesome powers aren't going to be much help in hockey since they don't include the power to skate..

After weeks of practice, he’s finally ready for the big game…but can a centuries-old vampire really learn new tricks? This hilarious, energetic picture book encourages teamwork, perseverance, and a love of hockey that will last a lifetime, even for an immortal being.